Baseball: Speeding up the game is not the answer

The powers-that-be in major league baseball (MLB) want to speed up the game. Why? Part of the reason is a perception that baseball has an age problem. According to Sports Media Watch approximately half of the TV viewers of the 2013 World Series were 55 or older and the median age of viewers on Fox, ESPN, TBS and the MLB Network throughout the 2013 season was between 54 and 55. MLB sees this as a serious problem and wants to attract younger viewers.

The executives who run major league baseball think a faster game will appeal to younger viewers who, they believe, have short attention spans. They think that speeding up the game will make baseball competitive with the faster-paced games that younger viewers like to watch. Concern with the pace of play might appear sensible if your attention is focused on the mainstream sports broadcast by television networks. It makes less sense when you look at the sports that are actually watched by the younger viewers MLB wants to attract.

What sports do younger viewers like to watch? eSports in general and MOBAs (Multiplayer Online Battle Arenas) in particular. The two most popular MOBAs in the United States are League of Legends (LoL) and Defence of the Ancients 2 (Dota 2). LoL and Dota 2 are fantasy-themed MOBAs in which two 5-player teams compete for control of a battlefield. They are played by both casual players and professional teams and are immensely popular among the younger viewers desired by MLB. 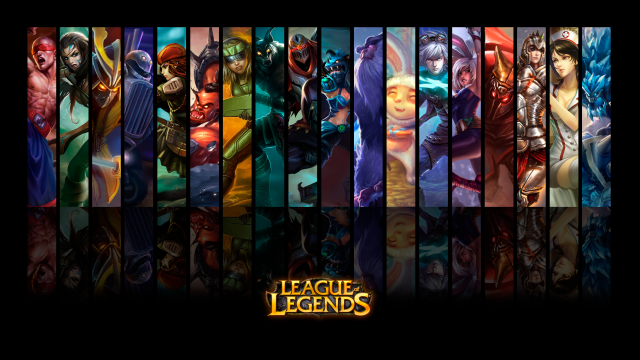 How popular is “immensely popular”? In 2013 (the most recent year for which we have comparable data) 16.1 million people in the US played baseball or softball at least once during the year. Also in 2013, 67 million people around the world played LoL every month and 27 million people played every day. Superdata Research reports that LoL had more than 90 million monthly players in April of 2015. Riot Games, the makers of LoL, have not broken down these numbers by country although they do list the US as one of the countries where LoL is most popular. In terms of number of hours played, LoL has been the most played PC game in both North America and Europe for the past 3 years.

Are the people who play LoL the people baseball wants to attract? In 2012 90% of LoL players were male, 85% were between 16 and 30 years of age, and 60% were enrolled in or had completed some college. This is a prime demographic for MLB.

MLB has become very proactive in trying to get more kids to play baseball at the Little League level based on the belief that playing at a young age will produce fans who will watch baseball throughout their lives. Watching baseball is where the money is. More than five times as many people play LoL in a month than play baseball or softball in a year but playing and watching are two different things. How many people who play LoL would be willing to sit down and watch it? 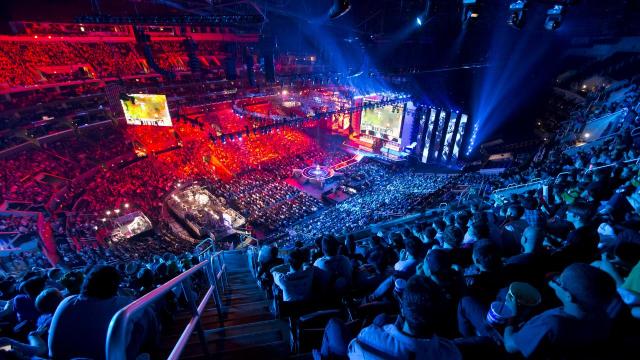 The 2013 League of Legends championship.

The Boston Red Sox beat the St. Louis Cardinals 4 games to 2 in the 2013 World Series. The games were broadcast by Fox and had an average viewership of 14.9 million people. The LoL championships in 2013 were held at the Staples Center in Los Angeles. The match was sold out and was broadcast over Twitch livestream where it attracted 32 million viewers. The average broadcast viewership for the World Series was less than half the number of people who viewed the LoL championship in 2013. The last time the World Series averaged more than 32 million viewers was in 1991 when the Minnesota Twins beat the Atlanta Braves in 7 games.

The LoL championship didn’t just crush the World Series in 2013. Viewership for the LoL championship match more than doubled the average for the Final Four basketball tournament (15.7 million), and soundly beat the BCS college football championship game between Alabama and Notre Dame (26.4 million), as well as game 7 of the NBA Championship between LeBron James’ Miami Heat and Tim Duncan’s San Antonio Spurs (26.3 million). 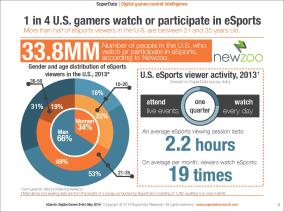 While LoL is a leader in the world of eSports, it is just one game among many. In general, who are the people who watch eSports? Are they in MLB’s target demographic? It is estimated that in 2013 a quarter of all US gamers watched or participated in eSports. The male/female split was 66%/34% which is very similar to MLB’s 70%/30% split. Over half were between 21 and 35 years of age with 84% of the men and 68% of the women aged between 21 and 50. eSports viewers are precisely the demographic that MLB wants.

MLB doesn’t only want younger viewers, it wants younger viewers who will spend money on their favorite sports. Do eSport fans spend money on their games? LoL is a free-to-play game with discretionary micro-transactions that players may purchase with real money if they wish. The game also makes money from tournament ticket sales. In 2013 LoL took in $624 million in revenue . That was more than the revenue of any major league baseball team and almost 166% of the average team revenue in 2013.

eSports fans are the people MLB wants to attract and it hopes to attract them by speeding up the game.  The team owners and MLB executives think eSport watchers have short attention spans and a faster game will naturally appeal to them. Let’s take a look at pace of play.

Baseball has advanced analytics that measure performance in a variety of ways. eSports has some analytics of its own.  One of these is ACM (actions per minute). ACM measures the number of game-relevant actions such as targeting a unit or issuing an order that are performed with either a mouse or a keyboard. Professional Korean game players average about 300 ACM. That’s equivalent to 5 actions per second sustained over minutes of average game play. When things get intense and the game speeds up (think a bang-bang double play in baseball) ACM typically averages around 400 at the professional level.

How does this compare with major league baseball? It is often said that hitting major league pitching is the most difficult thing to do in mainstream sports. The average major league fastball takes about 4 tenths of a second to travel from the pitcher’s hand to home plate. During that very brief time the batter must see the pitch coming out of the pitcher’s hand, determine its speed and trajectory, predict whether it will be a strike or a ball, and decide whether or not to swing. If he decides to swing, he must also decide how to swing and begin the action before the ball reaches the plate. During that same 4 tenths of a second a professional eSports player has carried out 2 actions. Thus far, baseball and eSports are not all that different; one action from a major league batter and two actions from a professional eSports player in 0.4 seconds.

The radical difference in pace of play between eSports and baseball is caused by what happens next. The average time between pitches in 2014 was 18.29 seconds. During that 18.29 seconds an average professional eSports player has completed 91 actions. Each of these actions involves seeing what is happening on the screen that might demand his or her attention, determining whether what is happening is being caused by a teammate, an opponent, or the game’s artificial intelligence, deciding whether he or she should respond, deciding what the response should be, and then carrying out the necessary action. On average a professional eSports player carries out 91 of these actions while a major league hitter deals with 1 pitch.

There are approximately 256 pitches throw in a major league game (2 teams x 34 at-bats per team x 3.76 pitches per at bat on average). Professional eSports players perform more actions in the time it takes to complete three pitches (273 actions) than the number of pitches thrown in an entire 3+ hour baseball game. This is a pace of play that is much faster than anything baseball can possibly achieve.

Shaving 5, 10, or even 60 minutes from the average baseball game isn’t going to make baseball more appealing to the eSport viewers MLB wants to attract. Not only are eSports played at a blistering pace that baseball has no hope of matching, the tens of millions of viewers who watch eSports understand what’s going on at these speeds because they play the games themselves. If MLB owners and executives think they are going to compete with eSports for viewers by speeding up the game, they are badly in need of a wake up call.

Put it together. eSports fans are exactly the demographic that MLB is eager to attract. They play and watch eSports in numbers that dwarf the numbers that play and watch baseball. They spend very large amounts of money on their games. The pace of play in eSports is radically faster than the pace of play in baseball. MLB thinks speeding up the game will attract eSports fans.

It’s time to wake up. Targeting pace of play as an aspect of the game that can be changed to make baseball more competitive with eSports for a younger viewing audience’s time and attention is setting baseball up to fail.

How do you do that?

I am a cognitive scientist, a freelance writer and author (Nutrition for Cyclists: Eating and Drinking Before, During and After the Ride), a musician (Parametric Monkey - stream on Spotify, Soundcloud and YouTube), a bookstore owner (Monkey Books - first edition mystery, science fiction, fantasy and more, listed on ABE books, Amazon and Biblio), and a retired house painter, children's theater actor & owner, and university professor. I'm also a regular contributor to the technology section at Forbes and I write a cycling blog called Tuned In To Cycling. You can follow me on twitter @TheInfoMonkey and contact me at murnane.kevin@gmail.com.
View all posts by Kevin Murnane →
This entry was posted in Baseball and tagged baseball, Dota 2, eSports, League of Legends, MOBA, pace of play. Bookmark the permalink.

2 Responses to Baseball: Speeding up the game is not the answer