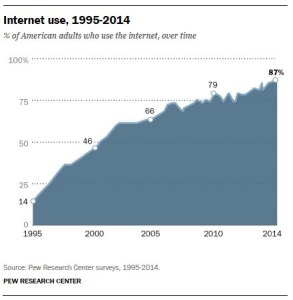 How deeply has the internet penetrated US society? What kind of people are online? How many US adults who are online make use of social media? Are there differences in the kinds of people that use different social media? The Pew Research Center has been tracking internet usage for 25 years and can provide at least partial answers to these questions.

If you thought that just about everybody uses either the internet or email, you’re right. Data gathered in January 2014 indicate about 87% of US adults use the internet.  However, there are some interesting demographics in play here. There are no statistically reliable differences in internet use when the data are broken down by sex, ethnicity or where people live (urban, suburban or rural). As most people would expect, there are age differences. The youngest group (ages 18-29) uses the internet more than all others while the oldest (65 and above) uses it the least.  The seniors are not as disconnected as you might think, however. Approximately 57% of people 65 and over use the internet. 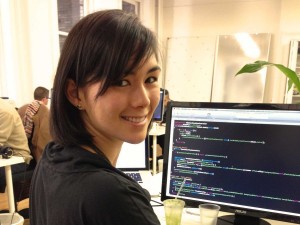 It seems there’s an opportunity being missed among this low-education group.  The ability to write code is probably the most widely marketable skill in the US economy right now as there is a digital component to just about everything we do, buy, or use for entertainment. Moreover, programming typically pays well (in 2012 median annual salary for programmers was about $74.2K) and is one of the occupations where demonstrable skill is much more important than an academic degree in finding a job.  Self-motivation, discipline, an internet connection and less than $100 are all you need to make a substantial start on learning how to program in any one of a variety of languages.

Things get more interesting when we look at demographic breakdowns among online adults who use social media.  Unfortunately, the only social media the Pew Center gathered data about for a report issued in 2013 were Facebook, Twitter, Instagram, LinkedIn and Pinterest.  It would have been nice to know about Tumblr, YouTube, Reddit and Google+ as well.

Approximately 18% of online adults use Twitter.  Twitter users tend to be non-rural, non-hispanic blacks who are 29 years of age or younger. There are no reliable differences among Twitter users for sex, level of education or income.

Approximately 17% of online adults use Instagram.  Instagram users tend to be non-rural, non-hispanic black women who are 29 years of age or younger and have completed some college. There are no reliable differences among Instagram users for level of income.

Approximately 21% of online adults use Pinterest.  Pinterest users are much more likely to be women and tend to be 49 years of age or younger, have completed at least a college degree, have annual incomes of $75K or more and live in the suburbs. There are no reliable differences among Pinterest users for ethnicity.  Pinterest users are the most demographically distinct of all of the groups in the Pew report.

Approximately 22% of online adults use LinkedIn.  LinkedIn users tend to be non-rural, non-hispanic men who are between 30 and 64 years of age, have completed at least a college degree and have annual incomes of $50K or more.

In Critical Thinking: How Reliable are Conclusions Based on Social Media Data? we take a look at how these demographic differences can impact analyses and predictions that are based on social media data.

I am a cognitive scientist, a freelance writer and author (Nutrition for Cyclists: Eating and Drinking Before, During and After the Ride), a musician (Parametric Monkey - stream on Spotify, Soundcloud and YouTube), a bookstore owner (Monkey Books - first edition mystery, science fiction, fantasy and more, listed on ABE books, Amazon and Biblio), and a retired house painter, children's theater actor & owner, and university professor. I'm also a regular contributor to the technology section at Forbes and I write a cycling blog called Tuned In To Cycling. You can follow me on twitter @TheInfoMonkey and contact me at murnane.kevin@gmail.com.
View all posts by Kevin Murnane →
This entry was posted in Demographics and tagged demographics, facebook, instagram, internet use, linkedin, Pew Research, pinterest, social media, twitter. Bookmark the permalink.