How Much Snow Have You Had? 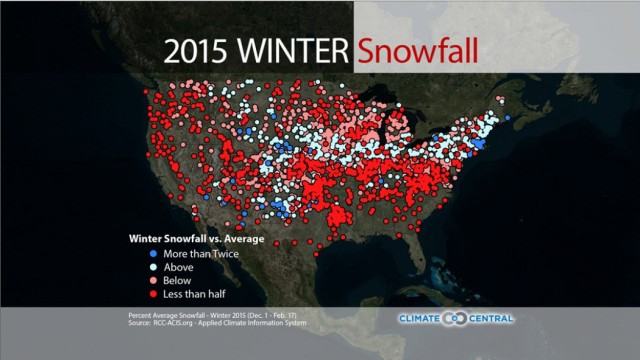 Boston has been buried in snow this winter as has much of New England. However, most of the rest of the United States has had less snow, and often much less snow, than normal.

The map above compares an average winter’s snowfall with the snow that has fallen this year from December 1 through February 17. As you can see, there is a band through the upper midwest that has had above average snow but the usually snowy states of Minnesota, Wisconsin, Michigan and North Dakota have been having a light snow winter. Most of the Rocky Mountain states along with everything west of the Rockies is light on white this winter as well. At least as far as snow is concerned, it has been a pretty easy winter for most of the country thus far.

The map is from Climate Central, that, in its own words, is

An independent organization of leading scientists and journalists researching and reporting the facts about our changing climate and its impact on the American public.

The website is a seemingly rich resource for information about climate and weather that has one apparent weakness. They do not appear to provide the user with information about where their data are coming from or, if they provide this information, it is not obvious where to find it on the website. For example, the article that accompanies the average snowfall map doesn’t tell you anything about either the source of the data about this year’s snowfall or how the average snowfall for the country was calculated. Does Climate Central’s snowfall data come from a government source like the National Weather Service, a private source like AccuWeather, or is it their own data? Which years was the average calculated over? Did the same set of years go into the average for each of the points on the map?

The user isn’t given any information that would allow one to answer these questions. This isn’t to say that there are problems with the data Climate Central uses. I would hazard a guess that there aren’t but the user shouldn’t have to guess. The missing information is fairly basic and straightforward and is important for users who wish to evaluate Climate Central as a source for reliable climate and weather information.

I am a cognitive scientist, a freelance writer and author (Nutrition for Cyclists: Eating and Drinking Before, During and After the Ride), a musician (Parametric Monkey - stream on Spotify, Soundcloud and YouTube), a bookstore owner (Monkey Books - first edition mystery, science fiction, fantasy and more, listed on ABE books, Amazon and Biblio), and a retired house painter, children's theater actor & owner, and university professor. I'm also a regular contributor to the technology section at Forbes and I write a cycling blog called Tuned In To Cycling. You can follow me on twitter @TheInfoMonkey and contact me at murnane.kevin@gmail.com.
View all posts by Kevin Murnane →
This entry was posted in Seasons, Weather and tagged snow, snowfall, weather. Bookmark the permalink.