On Broadway stacks 13 data panels on a horizontal line that moves from the south end of Broadway on the left to the north end on the right.  Reading from the top, the 13 panels show the following.

Landmarks and cross streets to tell you where you are

Colors from the Street-View facades

The Manhattan neighborhood you’re in

The information in each panel is compiled from data gathered every 30 meters along Broadway’s 13.5 mile length. You can click-and-drag with the left mouse button to scroll-stroll along Broadway and use the mouse wheel to expand a panel such as the one from Columbus Circle on 59th Street that is shown on the left.

The data compiled in On Broadway are not drawn from the same time periods although all of it is recent. The taxi data are based on 22 million trips taken in 2013. The Foursquare data are based on a bit more than 8.5 million check-ins from 2009 t0 2014. The Twitter data is from all publicly shared tweets with images between February 26 and August 3, 2014. The Instagram data is from all publicly shared photos from the same time period as the Twitter data. There are 713 individual panels and 661,809 Instagram photos in On Broadway. 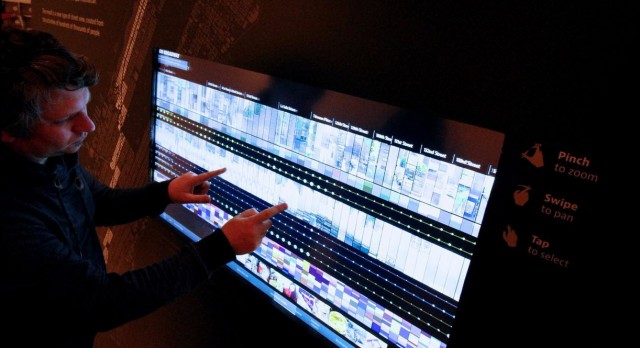 On Broadway is an interactive installation which is on display at the Public Eye Exhibition at the New York Public Library until January 3, 1916. The New York Public Library is located about a block east of Broadway between 40th and 42 Streets. If you’re in the area, check it out.  If you’re not in the area, you can check out the web version. There’s a lot of data in On Broadway so loading the app in your browser may take some time if you have a slow internet connection.

I am a cognitive scientist, a freelance writer and author (Nutrition for Cyclists: Eating and Drinking Before, During and After the Ride), a musician (Parametric Monkey - stream on Spotify, Soundcloud and YouTube), a bookstore owner (Monkey Books - first edition mystery, science fiction, fantasy and more, listed on ABE books, Amazon and Biblio), and a retired house painter, children's theater actor & owner, and university professor. I'm also a regular contributor to the technology section at Forbes and I write a cycling blog called Tuned In To Cycling. You can follow me on twitter @TheInfoMonkey and contact me at murnane.kevin@gmail.com.
View all posts by Kevin Murnane →
This entry was posted in Information visualization and tagged Broadway, information visualization, New York, New York Public Library, On Broadway, Public Eye Exhibition. Bookmark the permalink.