Ride a Satellite and Orbit the Earth 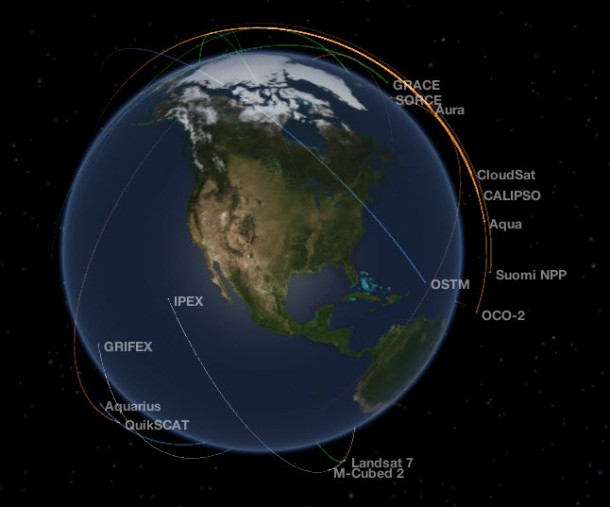 NASA has created an interactive AAA app called Eyes on the Earth.  AAA? Awesome? Amazing? Absolutely!  If you are interested in earth-orbiting satellites and the information they gather, beautiful pictures of the earth, or cool things on the internet, check this out.

What is Eyes on the Earth? Start with a gorgeous image of the earth built from satellite imagery.  You can zoom in and out and rotate the planet as you please so that you can see any area of the globe.

A button sets the app to the current time and then the earth starts to rotate on its axis. There’s a slider that controls speed so you watch what’s happening at whatever speed you like. Watch the terminator line sweep to the west as city lights bring the surface to sparkling life behind it. 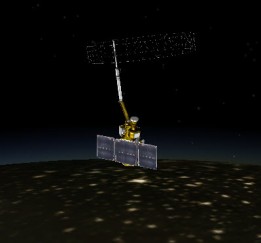 SMAP satellite that takes high-res pictures of soil moisture that are used to monitor water availability around the earth.

Here’s where things start to get interesting. Eyes on the Earth follows 21 satellites as they orbit the globe. The orbital tracks of the satellites are shown circling the rotating planet with results that are often mesmerizing. Clicking on a satellite removes all of the other satellites from the display and pops up a window that gives some information about the satellite you clicked. The window has a “Compare Size” button that zooms you in on the satellite so you can see what it looks like and lets you add a picture of a person or a school bus next to the satellite so you have an idea of the satellite’s size. These pictures are displayed over the rotating planet which gives you an over-the-shoulder, ride-along view on the satellite’s journey around the earth. As with the main display, you can rotate and zoom this view to get just the view you want.

Eyes on the Earth’s relief map of the Himalayan mountain range.

You can toggle city names on and off. You can change the image of the earth from a flat representation to a relief map that looks terrific. There’s also a telescope function that let’s you click on any location on the planet and see the sky from that location with the constellations mapped out. The telescope image also rotates so you can watch how the constellations move through the sky at your location. If you care about someone who is far away, you can make use of the telescope viewpoint to feel closer to them by seeing what the nighttime sky looks like wherever they are. The telescope viewpoint does not work if the relief map viewpoint is activated.

Eyes on the Earth includes many overlays that show information that has been gathered by the satellites. Examples include the latest photos of earth taken from space, daytime surface air temperatures, monthly carbon dioxide and carbon monoxide levels and many more. The earth still rotates when an overlay is active and the satellite that gathered the data shown in the overlay is shown orbiting the planet in the display .

The red dot in the picture above is a hotspot at the location in the French Alps where the Germanwings airplane was crashed by its copilot on 24 March, 2015. Clicking on the hotspot zooms in on the location, pops up a window with information about what happened or is happening there, and shows a recent satellite photo of the location. The German airline crash is part of the category Big Events. There are also categories for fires and storms, and for events that involve the land, water, ice or the oceans. You can examine the hotspots in any of these categories for each year going back to 2012.

Eyes on the Earth was built by NASA’s Jet Propulsion Laboratory at the California Institute of Technology.  The still pictures shown in this article don’t begin to do it justice. The movement of the earth and the satellites is what makes it so initially appealing. Then, as you delve into the app, it keeps getting richer and richer. You will have to download and install the app first but it doesn’t take long and it’s well worth it.   Check it out.

I am a cognitive scientist, a freelance writer and author (Nutrition for Cyclists: Eating and Drinking Before, During and After the Ride), a musician (Parametric Monkey - stream on Spotify, Soundcloud and YouTube), a bookstore owner (Monkey Books - first edition mystery, science fiction, fantasy and more, listed on ABE books, Amazon and Biblio), and a retired house painter, children's theater actor & owner, and university professor. I'm also a regular contributor to the technology section at Forbes and I write a cycling blog called Tuned In To Cycling. You can follow me on twitter @TheInfoMonkey and contact me at murnane.kevin@gmail.com.
View all posts by Kevin Murnane →
This entry was posted in Earth, Space and tagged earth, Eyes on the Earth, NASA, satellites. Bookmark the permalink.