Does Daredevil Have a Harder Time Keeping His Balance Because He’s Blind?

In the 10th episode of the Netflix Daredevil series Foggy asks Matt (aka Daredevil) if being blind has an effect on losing your balance when you’ve had too much to drink.  Good question. Matt answers that balance has something to do with fluids in the inner ear but he thinks he might have more problems with balance than a sighted person.  Good answer. He’s in the right ballpark but there’s a lot more to it.

How does human balance work? How does it work if, like Daredevil, you’re blind?

Standing upright without tipping over and moving without falling down seem simple but they’re not. Think about what a baby goes through when it’s learning to stand and walk. In order to maintain balance the central nervous system has to integrate three different kinds of information which indicate the position the body is in, where it is in space, and how it is moving. 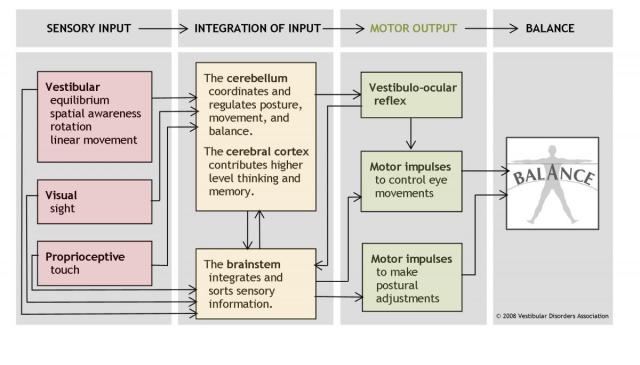 When Daredevil talks about fluid in the inner ear he’s talking about the vestibular system which provides information about how how the head moves and how it is positioned with respect to gravity and the rest of the body.  The vestibular system has two primary components, one for detecting rotational movement and one for detecting linear movement.

The semicircular canals detect rotational movements such as when you nod your head or turn it to look to the side.  The fluid that Daredevil talks about is in the semicircular canals. When the head rotates inertia causes the fluid in the canal to move more slowly than the membrane that surrounds it. This causes the fluid to slosh up against one side of the membrane in the same way that water in a glass will slosh up against one side of the glass if you move the glass too fast. Hair cells in the semicircular canals pick up the slower movement of the fluid and send this information to the brainstem where it is used to determine how the head has rotated.

Linear movement occurs when you move forward or backward through space. Two structures in the vestibular system, the utricle and the saccule, detect linear movement. These structures work in a way that is similar to the semicircular canals except that instead of detecting movement in a fluid, the hair cells in the utricle and the saccule detect movement in a membrane that is weighted with crystals that make the membrane sensitive to gravity.

The vestibular system provides some of the information that is needed to keep your balance but it doesn’t provide all of it.  What else is needed? Something that Daredevil doesn’t have – vision.

An important part of keeping your balance while you are moving is being aware of objects and circumstances in the world around you that affect how you move. Vision provides this information for people who are not blind or visually impaired. For example, seeing a curb lets you know that you have to alter your walking pattern to step up onto the sidewalk and seeing ice in your path let’s you know that you have to walk differently in order to keep from slipping, losing your balance, and falling down. If you’ve ever walked down the stairs and taken the first step away after you reached the bottom only to discover that you made a mistake and there was one more step down, you know how badly balance can be disrupted when vision doesn’t supply the correct information about where you are in the world.

Vision tells you what’s going on in the world around you and the vestibular system tells you where your head is located and how it moves but this information is of little use if you don’t know where the rest of your body is. The proprioceptive system provides information from the skin, joints and muscles that tells you how the different parts of your body are positioned with respect to each other. Sensory receptors in the neck, ankles, and the soles of the feet are especially important in keeping your balance. Think about walking on dry sand at the beach. Even if your eyes were closed, receptors in the soles of your feet and ankles would let you know that you were walking on a soft and giving surface that demands adjustments in how you walk in order to keep your balance.

Keeping your balance while you move also involves making use of information you have learned about how to interact with things in the world. Take the case where you have to go up or down stairs. First you have to recognize that the thing you’re seeing in front of you is a set of stairs. The information that the visual pattern you are seeing means there are stairs ahead is accessed from the cerebral cortex in the brain. You also have to retrieve information about how to carry out the different movement sequences that are needed to walk either up or down stairs. This information is accessed from the cerebellum.

All of this information is integrated and coordinated in the brainstem using a network of feedback loops. For example, if you are blind like Daredevil or have your eyes closed, the sensory receptors in your neck will tell you that your head is tilted forward while the gravity sensing ability of the vestibular system will tell you that you are either facing the ground because you’re standing up or facing a wall because you’re lying in bed.

The vestibulo-ocular reflex that links the visual and vestibular systems is another example. This feedback loop allows the eyes to remain focused while the head is moving and it is very important for maintaining balance among sighted people. If you spin around in a circle, you’ll usually get dizzy and lose your balance more quickly if your eyes are closed.

What about Foggy’s original question? Does Daredevil have a harder time keeping his balance because he’s blind? Is he likely to have balance problems when he’s been drinking? 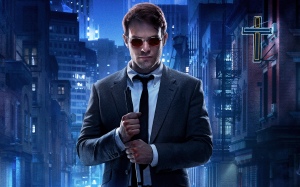 What about vision? If Daredevil has balance difficulties, this is where you would expect the root of his problem to lie. Although he is blind, Daredevil’s remaining super-human senses and his non-human radar-like sense are supposed to provide enough information about the world around him to allow him to move and keep his balance as well as or better than a sighted person. Might alcohol have a negative effect on the senses that Daredevil uses instead of vision? Probably. Alcohol depresses all activity in the nervous system which should affect all of the senses. Also, there is evidence that alcohol consumption raises auditory thresholds (makes things harder to hear) so if Daredevil is relying on hearing in place of vision to maintain balance, he should have a harder time after he’s been drinking.

What about proprioception? Given his acrobatic fighting and movement skills it looks like Daredevil has exquisite proprioception so you wouldn’t expect balance problems from this source. Once again, however, alcohol could trip him up. Alcohol consumption has a negative effect on proprioception. This negative effect is the reason why the standard sobriety test of touching your finger to the tip of your nose with your eyes closed works as well as it does. If he’s been drinking, Daredevil probably doesn’t want to be stopped by the police for a sobriety test.

So, does Daredevil have a harder time keeping his balance because he’s blind? Who knows? Daredevil is a fantasy character who does things that nobody, blind or sighted, can do. The creators who write Daredevil aren’t constrained by the limitations of the human balance system. 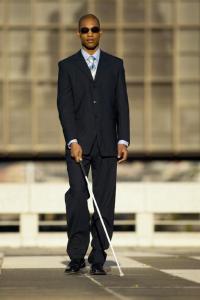 If you keep this in mind, you can take care to avoid doing things like jostling a blind person that might cause them to lose their balance. This is especially important in situations that put extra stress on the balance system such as going up or down stairs or stepping over a curb onto the sidewalk. You may not be accomplishing something as grand as saving Hell’s Kitchen from Morton Fisk, but, in a small way, you will be doing the same thing Daredevil is doing – making the world a safer place for the other people in it.

I am a cognitive scientist, a freelance writer and author (Nutrition for Cyclists: Eating and Drinking Before, During and After the Ride), a musician (Parametric Monkey - stream on Spotify, Soundcloud and YouTube), a bookstore owner (Monkey Books - first edition mystery, science fiction, fantasy and more, listed on ABE books, Amazon and Biblio), and a retired house painter, children's theater actor & owner, and university professor. I'm also a regular contributor to the technology section at Forbes and I write a cycling blog called Tuned In To Cycling. You can follow me on twitter @TheInfoMonkey and contact me at murnane.kevin@gmail.com.
View all posts by Kevin Murnane →
This entry was posted in Science and tagged alcohol, balance, blindness, Daredevil, Netflix, proprioceptive system, vestibular system, vision. Bookmark the permalink.

1 Response to Does Daredevil Have a Harder Time Keeping His Balance Because He’s Blind?