Negotiating the Strike Zone During a Major League Baseball Game

Baseball is a game of brilliant and beautiful contrasts. People who don’t understand the game describe it as slow when in fact there is so much going on between one pitch and the next that it takes careful concentration and undivided attention to keep track of what just happened and how it is going to affect what is about to happen. Moments that seem calm and still are interspersed with moments of explosive speed and power. At the heart of the competition between two nine-player teams is a succession of intense and violent confrontations between two players, the pitcher and the batter.

The war between the pitcher and the batter is focused on the strike zone. If the pitch is in the strike zone the batter has to hit it or sit down and try again later. Three strikes and you’re out. If the ball is outside the strike zone, the batter wants to watch it go by. Four balls and you’ve overcome the first and most difficult obstacle to scoring; you’ve reached first base. The strike zone lies at the core of the game. What is it? Exactly? 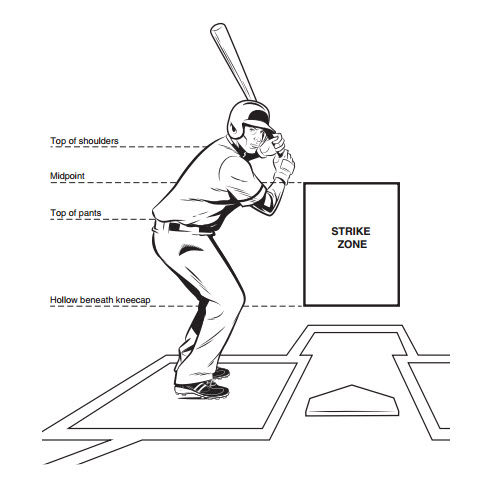 Major League Baseball’s Official Rules provide the following official definition of the strike zone along with the helpful diagram shown above.

The STRIKE ZONE is that area over home plate the upper limit of which is a horizontal line at the midpoint between the top of the shoulders and the top of the uniform pants, and the lower level is a line at the hollow beneath the kneecap. The Strike Zone shall be determined from the batter’s stance as the batter is prepared to swing at a pitched ball.

The definition is expressed in simple language that is easy to understand. The diagram is exact with sharp, clean lines enclosing the strike zone. It’s clear and straightforward. It’s also  a fantasy that may work for video game baseball or TV broadcast graphics like Pitch Trax, Fox Trax or ESPN’s K-Zone but it’s not the strike zone where pitchers and batters do battle in a real baseball game. The real strike zone is not clear cut, it’s not exact, and it’s constantly being  negotiated and renegotiated by the players and the umpire throughout the game.

The real strike zone begins with the umpire. The umpire doesn’t see a little box with sharply drawn edges; he sees empty space over the plate. He tries to figure out exactly what “the batter’s stance as the batter is prepared to swing at a pitched ball” means and uses whatever he comes up with and the the physical object that is home plate to construct an imaginary strike zone.

Umpires often have reputations as pitcher or batter friendly depending on how closely their imaginary strike zone conforms to players’ ideas about what the ideal strike zone should be. Analysts and commentators often say that players don’t really care whether the umpire is batter or pitcher friendly as long as he is consistent and calls balls and strikes the same way for both teams throughout the game. This is ironic because from first pitch to last, batters, pitchers and catchers are doing everything they can to change the way the umpire calls balls and strikes so that it is more in their favor. 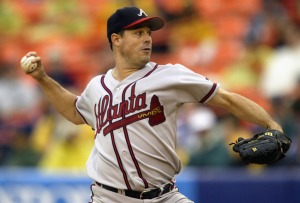 Pitchers who are able to control the location of a pitch with a high level of precision will try to expand the zone by first establishing a strike near the edge of the umpire’s strike zone. They then throw a pitch a little further out and see if the umpire will call it a strike. If a strike is called, the pitcher places the ball a little further out and challenges the umpire to call another strike. This continues until a ball is called. The pitcher then moves back to the location of a previously called strike and starts the process all over again. Hall of Fame pitcher and four-time Cy Young Award winner Greg Maddux was a master at this. He had exquisite control and he was utterly relentless. Umpires hated it when Maddux pitched because they knew they were going to be subjected to constant, focused pressure to expand their strike zone.

The pitcher’s attempts to expand the strike zone turn the nice clean line that separates balls from strikes in idealized pictures into a fuzzy gray area. While the pitcher is trying to blur the line between balls and strikes through pitch location, the catcher is trying to expand the umpire’s strike zone using pitch framing. Pitch framing is the art of catching a pitch that is outside the strike zone in a way that makes it appear to the umpire as if it were in the zone. The pitch is outside the zone, the batter sees it is outside the zone and doesn’t swing, the catcher frames the ball so it looks like it’s inside the zone, and, if he’s successful, the umpire calls a strike. The fuzzy line between balls and strikes gets a little fuzzier.

Pitch framing was recognized as an objectively measurable skill after PITCHf/x was installed in every major league ballpark in 2006. PITCHf/x is a pitch-tracking system that provides relatively precise measurements of the speed and location of every pitch thrown in a major league game from the time it leaves the pitcher’s hand to the time it crosses the plate. Although it is designed to provide information about pitchers, the data PITCHf/x provides can also be used to measure both an umpire’s strike zone and a catcher’s skill at turning balls into strikes through pitch framing.

Few in baseball realized how valuable pitch framing can be in expanding the umpire’s strike zone before statistical analysts began to look at framing using PITCHf/x data. In 2011 Mike Fast published an article on Baseball Prospectus that estimated that catchers who excelled at pitch framing saved their teams between 15 and 30 runs per season while catchers with low pitch framing skills cost their teams about 15 runs per season. Baseball Prospectus ranked the Milwaukee Brewers catcher Jonathan Lucroy as the game’s best pitch framer in 2011 with an estimated 302 balls that were called strikes because of his pitch framing skills. Fast estimated that Lucroy’s 302 extra strikes saved approximately 17 runs over the course of the 2011 season. Seventeen runs saved by subtle shifts in the strike zone from one pitch to the next.

Batters have less opportunity to change the strike zone than pitchers and catchers but, at least in some cases, they can add their voice to the ongoing negotiation. Major league umpires take their job very seriously and they constantly monitor themselves with the goal of maintaining extremely high levels of performance. Part of this monitoring process involves postgame reviews of their ball and strike calls with the aid of technology like PITCHf/x. This gives them a pretty good idea of when they got it wrong and when they got it right.  It also gives them a pretty good idea of which batters have a good eye for balls and strikes. Two months into the 2015 season the Washington Nationals’ Bryce Harper has demonstrated an exceptional eye for the strike zone.  When a pitcher throws Harper a pitch in the fuzzy gray area that borders the strike zone, the umpire may give Harper the benefit of the doubt and call it a ball. When a batter like Harper enters the batter’s box, the strike zone the pitcher has been slowly and carefully expanding may suddenly shrink and this newly redefined strike zone may carry over to the following hitters.

Baseball is a deep game. At its heart lies a ferocious struggle over the strike zone between pitchers who bring power, command and guile, and batters who bring eagle eyes and lightning reflexes. The umpire defines the strike zone and fights throughout the game to keep it consistent while pitchers and catchers try to expand it and hitters try to shrink it. Pitches thrown when there is little on the line may be designed to shift the strike zone in order to set up pitches thrown later in the game when everything is on the line. Every pitch is a challenge. Every pitch is a negotiation between the players and the umpire for control of that fluid, imaginary space called the strike zone. This ongoing war at the core of the game is riveting to watch and is one of the reasons why baseball fans feel a thrill of anticipation every time the umpire takes his stance behind the plate and hollers . . .

I am a cognitive scientist, a freelance writer and author (Nutrition for Cyclists: Eating and Drinking Before, During and After the Ride), a musician (Parametric Monkey - stream on Spotify, Soundcloud and YouTube), a bookstore owner (Monkey Books - first edition mystery, science fiction, fantasy and more, listed on ABE books, Amazon and Biblio), and a retired house painter, children's theater actor & owner, and university professor. I'm also a regular contributor to the technology section at Forbes and I write a cycling blog called Tuned In To Cycling. You can follow me on twitter @TheInfoMonkey and contact me at murnane.kevin@gmail.com.
View all posts by Kevin Murnane →
This entry was posted in Baseball, Sport and tagged baseball, Bryce Harper, Greg Maddux, Jonathan Lucroy, pitch framing, sport, strike zone. Bookmark the permalink.