Streaming, Music and Money: Show Me the Value

We showed you the money in the previous post in this series. Showing the value is a more difficult proposition. In capitalist societies value is often measured, and sometimes exclusively measured, in monetary terms. There often seems to be a quiet assumption that if something does not have monetary value it has little value, and perhaps no value at all. While there is certainly monetary value in steaming music, I think the more important value by far lies in things that cannot be measured in dollars and cents.

As the music business transitions from a production-oriented industry to a service oriented industry it’s clear that the major monetary value in streaming lies with the streaming services. The record labels that produce music have to discover, support, and record musicians, distribute their music, and hope their stable of artists is successful in the music marketplace. Music streaming services don’t have to find new talent, they don’t have to support and record that talent, and they don’t care which artists succeed. Their problem is to provide a music delivery system that is successful with listeners and that almost always comes down to providing access to a wide and deep variety of content at an attractive price. 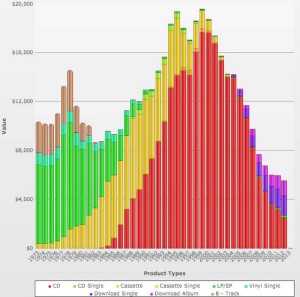 As streaming has increased in popularity, revenue from digital sales has decreased. The previous post in this series examined how this loss in revenue has been felt by both the record labels and the musicians who are signed to those labels. The complaints about streaming that you hear from musicians and music companies alike stem from the fact that both groups would rather see people buy their music than stream it because they make more money when people buy the music. They can complain as much as they like but the streaming cat is out of the bag and there’s no sign of it going back in. Listeners are showing a clear preference for paying less and not owning digital music as opposed to paying more for owning a digital copy.

Nevertheless, there is some monetary value in streaming for musicians. Musicians who perform on a song and are not the songwriters receive performance royalty payments when their song is streamed. It’s not very much but it’s better than nothing which is what performing musicians receive when their song is played on AM or FM radio.

Streaming also has monetary value for the fully independent musician who does not have the promotion and distribution power of a record label behind them. Before streaming there was very little chance that anyone anywhere would ever hear a self-produced recording. With streaming, self-produced music made by independent creators can be heard by anyone, anywhere, at any time. Again, very little money is made through streaming, but very little is more than nothing. 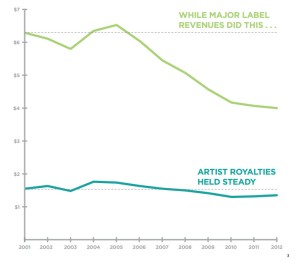 While streaming has led to a decline in revenue from digital sales for music producers, the loss in monetary value does not appear to be falling equally on all segments of the music production business. The graph on the left shows the declines in both record label revenues and artist royalties from 2001 to 2012. As can be seen in the graph, artist royalties declined slightly while label revenues dropped by more than a third. Care must be taken about drawing conclusions from this graph, however. First, as explained in a prior article, the record labels keep a large proportion of artist royalties until the money the label has invested in the artist is paid back. Second, the graph only includes data through 2012 and music industry revenue shifted markedly from digital sales to steaming in 2013 and 2014. However, if the record labels have continued to pay artist royalties at the levels seen in the graph, it appears that the labels are shouldering a proportionally larger share than the musicians of the loss in revenue caused by streaming.

So much for monetary value. What about non-monetary value? Does music streaming bring with it forms of value that cannot be measured in monetary terms? Oh, yes.

Listening to music is an immensurably pleasurable activity that we tend to take for granted. We can listen to anything we want whenever we want. Everyone can have their own soundtrack for everything that they do. For almost all of human history it wasn’t like this. Before the 1870s if you wanted to hear music, you had to be in the place where the musician was playing. Commercially available recordings only became widely available after Thomas Edison patented the phonograph cylinder in 1878. The first commercial radio broadcast happened in 1920, less than 100 years ago. It took about 5,000 years to get from the first use of the wheel on a transportation device to the bicycle; it took 88 years to get from the first radio broadcast to Spotify.

Roughly 15% of the people living in the US are enjoying a life span of 88 years or more. How do you put a monetary value on going from only being able to listen to a limited selection of recorded music when you were in the room with a large and expensive playback platform like the phonograph pictured above to being able to listen to whatever you want, whenever you want, wherever you are with a smartphone? 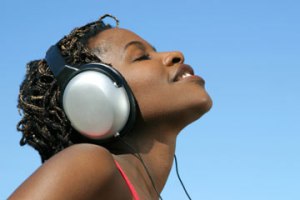 The value of music streaming for the listener is immense and immeasurable. For the first time since the advent of recorded music you can listen to whatever, whenever, and wherever you want and you don’t have to buy the music to do it. Before streaming, listening to whatever you wanted meant you had to either buy the music or steal it. Listening to it wherever you were meant you had to transfer it or buy it again in a format  that worked on your portable platform. If you didn’t want to buy or steal the music, or go through the process of making it portable, you were limited to listening to what was played on AM and FM radio. Listeners who didn’t steal music did all of this and paid to do it. Now the listener has access to so much more and it costs so much less. How do you put a monetary value on that?

Some might be tempted to limit the value of streaming for the listener to the monetary value indicated by the amount subscribers are willing to pay for a streaming service. I don’t think this is a good way to think about the value of streaming. The price point for streaming subscriptions is partially based on business factors that have nothing to do with the value streaming has for the listener. For example, streaming providers have had to price their service at a level that would attract a large number of users in order to have the market numbers that would encourage the large music companies to unlock their vast music catalogues for streaming.

As they age, many listeners continue to listen to the music that was popular when they were younger, often to the exclusion of current musicians and musical styles. Streaming has high value for these listeners because, with the exception of a small number of artists who retain high sales numbers over time, most music companies view their back catalogues as less valuable than their catalogues of current musicians. The result is that the catalogues for these older artists are almost always available for streaming in their entirety which benefits listeners who do not stray far beyond the music of their youth.

There is a small segment of the listening community composed of people who retain an active interest in music, who listen with open ears that are not limited by genre, and who are willing to spend time seeking out new music and musicians who are not well known. For these people streaming is a godsend. The combination of streaming with music aggregators like Tunecore that provide access to streaming services for independent musicians at a minimal cost provide the curious and adventuresome listener with a virtually limitless wealth of music to explore and enjoy. It’s hard to put a monetary value on that. 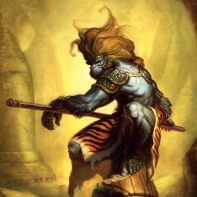 This brings us to another group for whom streaming has value that is hard to measure – the independent musician. Many people make music because they love it. They don’t make music to make a living, they make music for their own enjoyment and for the enjoyment of others. Before streaming those others were largely limited to the people who were in the room with you when you were playing. Streaming has given these musicians a world-wide audience. 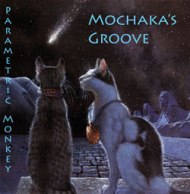 If you make music, make art, make food, make anything for other people to enjoy you know this. If you don’t do any of these things, ask someone who does. A large part of the value you get from your creative activity stems from the enjoyment other people get from what you’ve made. I’ll never forget the day I was in a store when they streamed one of my tracks on their sound system. While it was playing I noticed a kid over in the corner who was standing near a speaker and just rocking out to the music. I didn’t butt in and stroke my ego by telling him I was the musician he was digging. I just enjoyed watching him dance. Monetary value? About $0.0011. Non-monetary value? Priceless.

(Full disclosure: I am a completely independent musician that makes, sells, and streams music under the name Parametric Monkey on Spotify, Google Play, iTunes, Deezer, Tidal, YouTube and many other streaming services such as Soundcloud that are not shown on Selling Out. I’m a member of ASCAP as both the publisher and the songwriter of the songs I release as Parametric Monkey. The aggregator I use to place my music with streaming services is Tunecore.)

I am a cognitive scientist, a freelance writer and author (Nutrition for Cyclists: Eating and Drinking Before, During and After the Ride), a musician (Parametric Monkey - stream on Spotify, Soundcloud and YouTube), a bookstore owner (Monkey Books - first edition mystery, science fiction, fantasy and more, listed on ABE books, Amazon and Biblio), and a retired house painter, children's theater actor & owner, and university professor. I'm also a regular contributor to the technology section at Forbes and I write a cycling blog called Tuned In To Cycling. You can follow me on twitter @TheInfoMonkey and contact me at murnane.kevin@gmail.com.
View all posts by Kevin Murnane →
This entry was posted in Music and tagged music, music streaming, value. Bookmark the permalink.